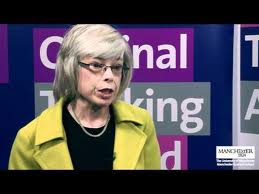 Susan Moger: ‘She was beloved on earth’

We all have our own Susan though our various memories. I want to share some of mine, together with contributions from Susan’s family and from her many friends around the world.

At first, I thought our various individual memories would be unique, but I quickly discovered several widely shared themes. For example, if there is an essence of Susan that could be bottled, it would be undiluted high-concentration determination always to do what she had set about doing, to the limits of her remarkable abilities.

In this respect, I recall catching a glimpse of her many years ago, walking up Oxford Road to the University of Manchester, though a blustery rain storm, leaning into a head wind. Metaphorically, it captured how she met subsequent headwinds in a similar way.

Another favourite memory of mine illustrates how she was often incapable of claiming credit for much of what she did for others. At times that later became painful, as she learned how the world rarely notices unpublicized efforts. We were working together once with a particularly favoured organization, Guinness Ireland, in Tinnakilly, County Wicklow. Susan had become a huge favourite of the Guinness executives. Our job was to help them come up with their own ideas to solve a tricky corporate problem. Susan came up with the idea which was eventually implemented. The client thanked me for the idea, publicly, at the end of the meeting.  Our rule was to say the team got the idea not an individual. Susan never claimed ownership, although she rightfully reminded me of the injustice of what had happened.

Her distaste for self-marketing was shown in her customary introduction to new groups of executives. When teaching together, Susan would begin “I qualified as a nurse, becoming a Senior sister in intensive care. I then took a degree in history at the University of Manchester, before becoming involved as a member of Manchester Business School.” For whatever reason, I had to add the additional information that her degree was a first-class honours one, and that she also had a most appropriate Masters’ degree, by research, in business, researching personality styles.  The case examples from her Masters’ were later to form the basis of the Handbook for Creative Team Leaders.

Theory and practice from her research were to come together when attended a session on personality profiling on styles of innovating and managing change. It turned out we had polar opposites on all the factors of the test. The distinguished tutor used our results to suggest that if we worked together over an extended period we would be an example of a dysfunctional team, because we would have too many personality differences to resolve. He was right about the differences, but was wrong about his prediction that the relationship was ultimately doomed through our incompatibility.

We had a scholarly riposte to that scholar, subsequently. We wrote and published a paper examining the dynamics of the film The Odd Couple, with its characters Felix and Oscar. We drew on our own diverse styles, to illustrate the tensions and nevertheless the richness found in such a diversity. Felix, the neat meticulous and responsible partner, Oscar the slovenly disorganized one.

An achievement of which Susan was rightly proud, was the success of the international journal, Creativity and Innovation Management (CIM). At first it was produced by ourselves, during which she showed her exceptional editing skills.  It was work for which determination and acceptance of little immediate recognition are required. The Felix of the partnership so often took the lead. Susan had those requirements in bucketfuls. As the Oscar, I had thimblefuls of either, in comparison.

One article from Japan was eventually to become a tipping point. We could have rejected it as it needed such extensive deciphering. Late one Sunday night, with the copy still incomplete, we decided we had gone as far as we could with the article and of ten years of editing the journal.

A new editing team was needed, and ownership passed to a wonderful group at the University of Twente, and later, more recently to Potsdam.

Today it is one of the recognized journals in its field, retaining our original concern for understanding the practice of business creativity and innovation, while holding to high standards of research excellence. In recognition of her contribution, an annual best paper competition was instituted in her name, giving her great pleasure as a way of continuing our association with the journal.

Over time, Susan became a much-loved member of the international community, and a familiar contributor to conferences around the world. Friendships were forged from Twente to Taiwan, from Buffalo to Brussels. Her editing skills also began to reveal themselves in a range of books. Notable among these were collections of he annual conference reports from The European Association for Creativity and Innovation (EACI). The rewards were friendships made around Europe.

Back in Manchester, Susan became a source of comfort for ‘our’ students who often became part of our extended international family.

Another editing task she later would refer to time and again, was that of The Routledge Handbook of Creativity during which she was the ‘front office’ for dealing with twenty or so groups of leading academics in the field, including some for whom the description Prima Donna would not be too far from the truth. If the Japanese paper was my sticking point, this Handbook was Susan’s.  She vowed never to edit a collective work of that kind again. You will not be surprised to know that she kept her word.

On a more personal level, Susan was a gold-medallist in sending greetings and Thank-You cards. She would replenish a stock which was being regularly depleted through birthdays, anniversaries, congratulations for achievements, and after social meetings. I would sometimes be co-opted to share in their signing.

In these and other more personal situations, Susan had a remarkable memory. Her knowledge of sports of all kinds was encyclopaedic. In football and tennis, she was unmatchable. As far as I detected, it was only cricket which defeated her, and in particular the follow-on rule.

Her greatest sporting love was tennis. She became a member of the Northern Tennis Club, Didsbury, and helped for several years in running the junior tournament, and one of the Ladies’ teams. Both would have served as case studies of sports leadership and creative problem-solving.

One of her other sporting memories was of work at Manchester United, where at a dinner at the end of one event, she won a competition for a signed United shirt awarded by Sir Bobby Charlton, ever-after a prized possession.

Susan was a much-loved sister and aunt, generous to a fault, always willing to be supportive and provide encouragement. Never looking for recognition and with her contribution often only really known to those who were the direct recipient of it. As I learned later, in her final months, Susan kept sets of rosary beads – in her handbag, in her home desk and also in top bedside table drawer along with rosary prayer books and prayer cards for those in pain. One can only hope that in small hours of the night these brought her comfort and strength.

In the last decade of her life, Susan encountered a series of illnesses which required all her determination, and which left her increasingly frail.  Recently she regained her old enthusiasm with involvement with riding for the disabled. Music filled the house, until one piece from Sibelius became one of those themes which would not go away, as she prepared for an event which would require her to demonstrate new skills of dressage from a standing start.

In this, as in her later determination to continue to pursue tennis using lightweight balls and racquets, her courage shone through.  I began to see in her an anger against the challenges posed by her illness, which reminded me of the famous Dylan Thomas lines

Do not go gently into that good night.

Rage, rage against the passing of the light.

A consoling few lines were sent by editor Katharina Hölzle, speaking on behalf of the CIM journal. I will let her words speak for themselves.

“Susan was one of the most inspiring persons we have ever met and her warmth and passion have inspired us tremendously. And if there is a person where we found the Late Fragment by Raymond Carver better reflected, then it was Susan.”

by  Raymond Carver, A New Path to the Waterfall

And did you get what

you wanted from this life, even so?

And what did you want?

To call myself beloved, to feel myself

beloved on the earth.

As Katerina put it, Susan was truly beloved on earth.

We must appreciate her as a gift received, and , together with our mourning, cherish the memories of the kind I have outlined

This entry was posted on Friday, October 13th, 2017 at 1:56 pm and is filed under Uncategorized. You can follow any responses to this entry through the RSS 2.0 feed. You can leave a response, or trackback from your own site.