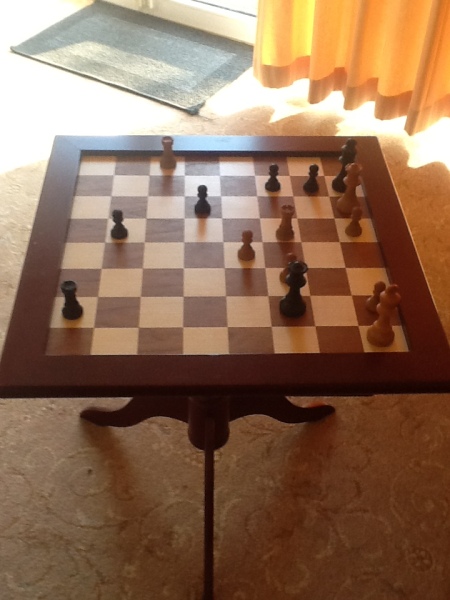 The end came as commentators were predicting that Magnus was losing the psychological battle. His play had become error-prone as time and again his opponent Serge Karyakin wriggled out from a nearly losing position.

The players had already completed the twelve full-time games, ending at six all.  Time and again the challenger had struggled then secured a draw, as Magnus failed to convert his pressure into a win.  Chess computers were reported as showing a slight advantage for the champion disappearing as several of games reached sixty plus moves.

Then, towards the end of the scheduled twelve games, Magnus played uncharacteristically In a headstrong fashion, drifting towards a loss, recovering, then turning down an obvious forced draw for a risky attempt to win. It all went wrong under cool defense. Karyakin won, and with three games to go was ahead. Magnus needed a win to retain his crown.

Now it seemed unlikely.  People were talking about Ali’s rumble in the jungle.  Magnus had been brilliantly rope a doped. Then another twist. Magnus persisted, almost won, let the win slip, before facing defeat finding a escape and grabbing a win.  All square. Talk turned from Ali to Houdini. At the highest level, Karyakin had been swindled.

The final and twelfth game was a climactic climb-down. Neither player risked all. Spectators witnessed a brief non-combative draw. Commentators were scathing. Watchers who paid high bucks may have felt as swindled as Karyakin in the previous game.

For the first time, the championship would be settled in a contrived tie-breaker. At this stage, there were to be four Rapidplay games. If the result was two games all, there was to be even faster play until a winner emerged.

I missed much of the last evening’s play at a quite different chess event. A popular club member was being sent on his way to his new home across the Pennines with a farewell drink. On returning home, I could have watched a televised football match but the chess was more gripping.

A quickfire draw. I made the blunder of assuming that chess had ended for the night. Then to my horror I turned to BBC’s Newsnight to learn Magnus and Serge were still slugging it out.   hastened back to my PC in time to follow the sensational concluding quick-play game which was to end the contest.

At that stage the commentators of the view that Magnus was psychologically finished. He had drifted from yet another near win to a draw with offered sneak swindle chances for his amazingly resilient opponent.

Then, the astonishing end to the entire match. Magnus, apparently showing signs of repeating the pattern of losing a winning game, spent much of his customary time advantage presumably searching for that elusive knockout blow. Karyakin had penetrated white’s position threatening mate. In what seemed a reckless counter attack.  Except he had seen an astonishing mate in three.

A rook check on the back rank drove black’s king into the Corner where it was cramped but not as secure as it looked. tdeceptively secure. In fact the game was already lost.

His next utterly unexpected move was a queen sacrifice offering black only two moves, two ways of taking the queen. Each led to mate in one move. If the king took, the rook mated behind the king (the corner h8 square). If the pawn took, the other rook mated by taking a pawn on the f7 square, to the side of the powerless king. It is reasonably obvious with a chess board, and if you have been told here is a brilliant move coming up.

“Oh my God” a commentator cried. “It’s all over. Magnus has won. Incredible.” It was. In olde days wealthy spectators would have showered gold on to the board at such a ‘bolt form the blue’.

Unable to sleep, I began capturing the moment, writing down what had jI had just witnessed. It was nearly midnight, six hours after the quick-play games had begun.

The move that won the world chess championship