Fame, wealth, celebrity. What more could a top sportsman want? 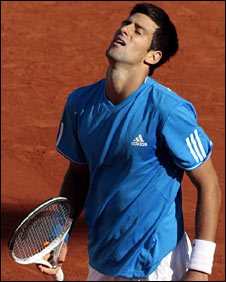 The answer, if you are Novak Djokovic, is the unconditional love lavished on his two great tennis rivals Roger Federer and Rafa Nadal

This thought was prompted by the sight of an increasingly unpleasant and truculent Djokovic at the French Open this week, followed by attempts to win back the crowd after the matches ended.

An embarrassment to watch

Yesterday [June 2nd, 2016], playing the quater final against Tomas Berdych, his behaviour was a particular embarrassment to watch. Novak, World No 1, tournament favourite, and undisputedly the best player in recent years, was increasingly anxious that rain delays might be damaging his prospects. But at the same time, it made the court surface difficult to move quickly.  and slide freely, depriving him of one of his biggest weapons.

At one stage, in frustration, he swung his racket wildly and risked immediate disqualification as it nearly hit a side-line official.

He later put pressure on the Umpire and appeared to pull rank to produce a brief rain delay. The crowd let him know their displeasure.

After the inevitable win, Novak’s attempts to win the affection of the crowd had a desperate air to them.  He spoke pleadingly, and in French, usually enough to win them over.

Then there was a little sugary routine encouraging applause from all corners of the court. To add to its impact, he encouraged a chubby little ball-boy to do it with him.

The winter of discontent

It reminiscent of one of those pantomime acts with children, where the littlest cutest one runs on stage late, to audience oohs and aghhs.

But it didn’t work. Novak’s winter of discontent goes on.

At least,  it shows that great athletes are motivated by a far greater force than being richly rewarded. There’s also the little matter of self-esteem.

This entry was posted on Friday, June 3rd, 2016 at 7:53 am and is filed under Uncategorized. You can follow any responses to this entry through the RSS 2.0 feed. You can leave a response, or trackback from your own site.